Searching for Traction in Yacolt 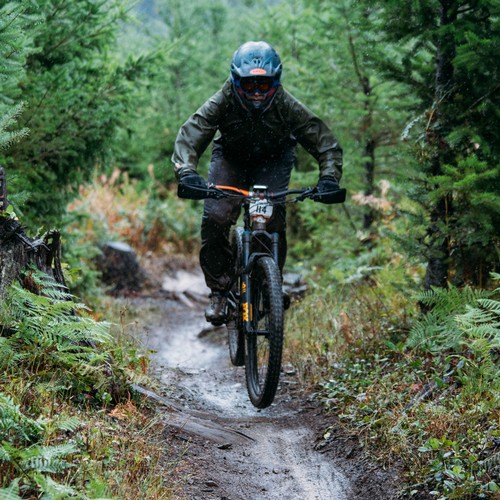 Wet, rooty, and slimy enduro with 6k ft of climbing and descending

It wasn't my worst result, but it definitely wasn't my best. I spent some time going over in my head all the things I could have done differently, but I think a lot of it was out of my control.


The night before, I was wrestling with a bout of some sort of intenstinal distress. It was probably some virus brought home by my kid after her first week at school. I thought I was over it by the morning of the race, but as the day wore on, I was definitely not 100% in the fueling department.


When I checked in for the race, the rain was coming down pretty hard. I spent most of last year doing long road rides in the rain, so I have my rain gear pretty well dialed. When my category rolled out, the rain was still coming down fairly hard. The first stage of the day was at the top of the mountain. The runoff was running down the middle of the trail like a small stream, giving almost no traction to the roots and loose rock. By stage 2, the rain had let up a bit. The trail gets a little slick in the rain, but drains well enough most of the time. But, I could not find my flow at all and ended up near the bottom of the standings. By the time I climbed up to the top of stage three, my energy levels were low. The trail was fast and full of big, physical features. It was everything I had just to stay on the bike. By the time I got to the top of stage four, I was pretty toast. After dropping in, I tried to sprint out of the second corner, but found I had no legs. At that point, I resigned myself and just tried to make it down in one piece.


Looking back on the last two races, there are a few training mistakes I made that I will need to take into account for the coming planning phase. One thing I skimped on this year was strength training, which is really coming back to bite me now. I have another race in two weeks; I'm hoping for a chance of redemption at least.