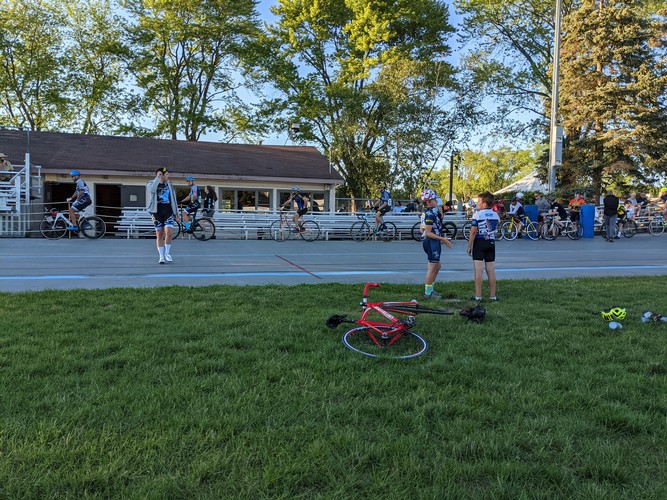 Tonights races included 4 events: An 8 lap scratch race, a 15 lap points race, a 10 lap masters scratch race and an unknown distance race. Tonight, the race organizer decided to combine Cat 3 and Cat 4. This resulted in a bigger field, but also a faster one.


In the first race, I started off feeling a little sluggish in the legs, which was not a benefit when there was an attack right off the start. I started to feel a little better toward the end, but only managed a mid level placing.


In the second race, I had a plan to sit out the first points round and then go for points on the second set. Plan A was to attack with a few laps before the points lap. I did so, however, I was following a 2 person prior attack and had one of their teammates glued to my wheel. I didn't catch the 2 leaders and the teammate passed me on the line, stealing a point from me. Things slowed down for the last 5 laps. I found myself in a decent position and crossed the finish line in 4th, collecting some more points and a 4th place overall.


The third race was a masters scratch race with 11 riders, including 9 Cat 1-2 and 2  Cat 4, including me. I didn't have much hope at a good place, but I thought it would be a learning experience. It was definitely a schooling. Those 1-2 guys can accelerate SO fast, and then they're gone. I couldn't match it. I'm sure their top end is a touch above me also. I don't think I'll be entering any more of these Masters races at Northbrook.


The last race was an unknown distance. Not surprisingly, there was an attack off the start, but that was foolish, because it was very unlikely that the unknown distance would be only a few laps. I rode easy in the draft for a few laps and then hung near the front and tried to stay so I would not be boxed in. When the bell signaled the last lap, I was in a decent position, but still a touch behind the leaders. I ended up 6th overall, which was fine.