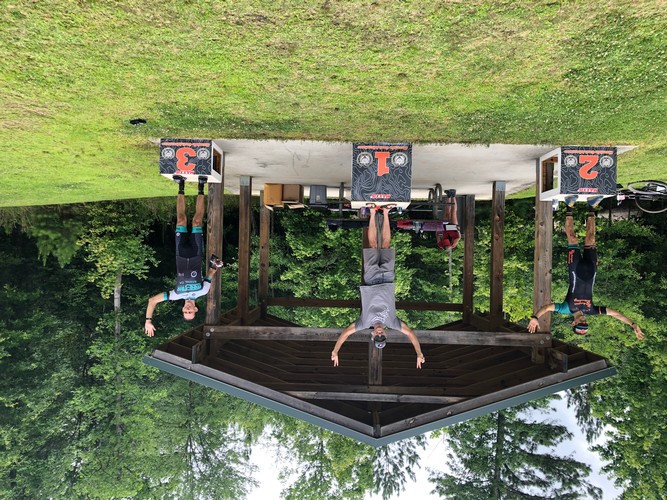 June 28, 2020 - It was a hot day on a tough, 31-mile course with a mix of flow and technical trails. I had some issues, but also some high points. I lost to my rival again by only a small margin, but I was still on the podium. It's good to be racing again. 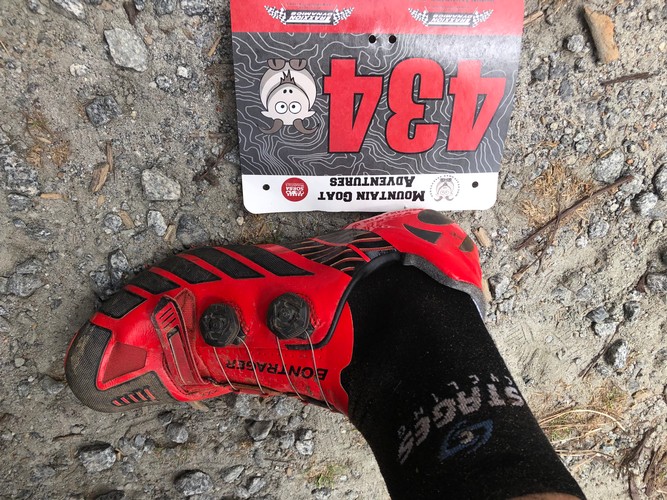 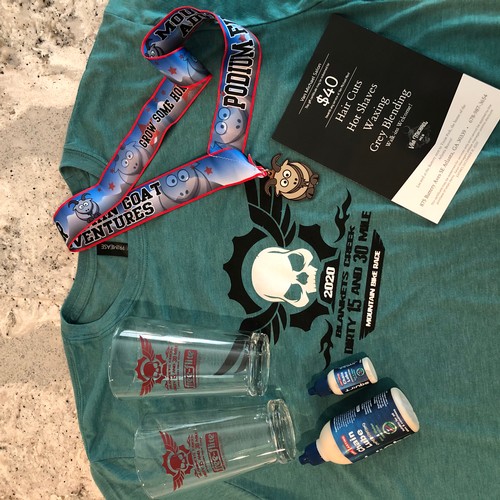 Yesterday I raced at the Blankets Creek Dirty 30 mountain bike race hosted by Mountain Goat Adventures. The course included two circuits of the three main loops at the park: Van Michael Trail, Dwelling Loop and the South Loop for a total of over 31 miles. One of my rivals was there, Tony Arru, a racer who beat me by only a minute when we faced off at the 15-mile version of this race two years ago. With precautions in place for the pandemic, waves of 5 to 6 riders were launched every two minutes. I was in the second wave of racers for the Intermediate/Sport 40+ Division, and my rival was with me. At the gun I settled into 2nd place behind Tony. His teammate, Eric, tucked in behind me in 3rd but passed me after I bobbled on a rooted section. We rode in these positions until part way through Van Michael, when Tony missed a tight turn and crashed (knowing that section of trail well was a big benefit for me). I followed Eric for a while as we made our way through the Dwelling and South Loops, but he distanced me on the more technical sections. Then my dropper seatpost failed ??. The damper shaft rotated to the side while I was negotiating obstacles and I had to stop twice to work on the seatpost for about 4 minutes. Tony and several other riders passed me. The seatpost would twist out of the forward position several other times during the race, and I was quite frustrated at losing time. I was able to pass most of these riders back, and I even caught Eric in the final few miles. He and I were both struggling in the heat combined with the technical aspects of the South Loop trail. At the end, I finished in third place with a time of 2 hrs 51 min, and just missed second place, as Tony finished less than a minute ahead of me (again). If only the dropper post hadn’t caused me to stop, or my ability to negotiate obstacles had been better late in the race, or I hadn’t stopped for too long at the halfway point to change water bottles and gloves. Lessons learned, I suppose. It was a tough day on the bike, but it felt good to race again after 4 months off. I definitely needed a beer and a nap later. My daughter ran in the MGA trail race earlier in the day, and won her age group. Thanks to God, my family, friends, Free Flite Bicycles, Stages Cycling and all of our sponsors. #stagescycling