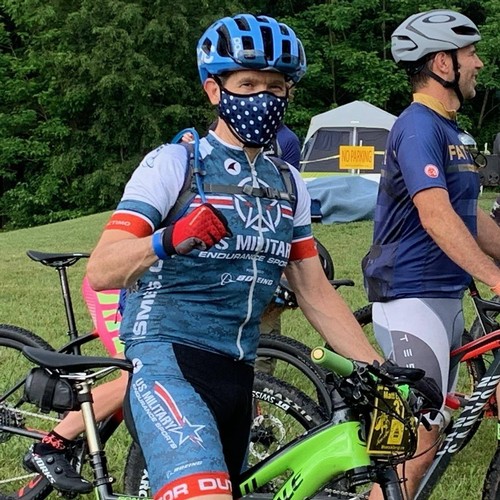 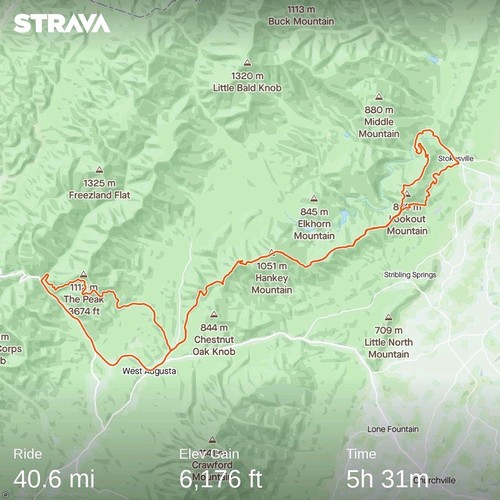 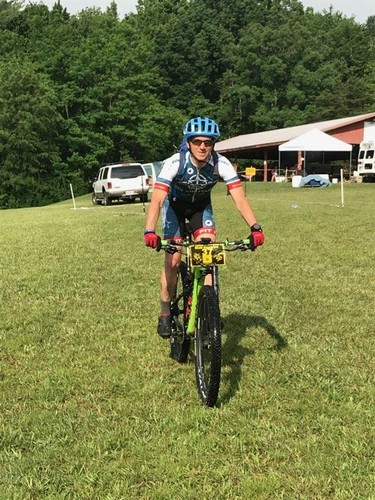 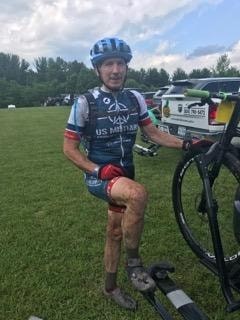 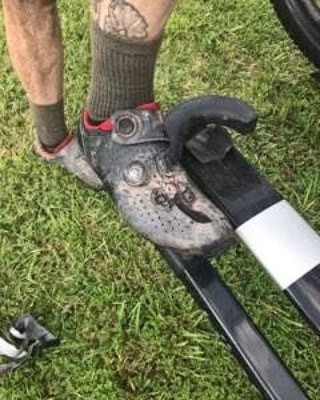 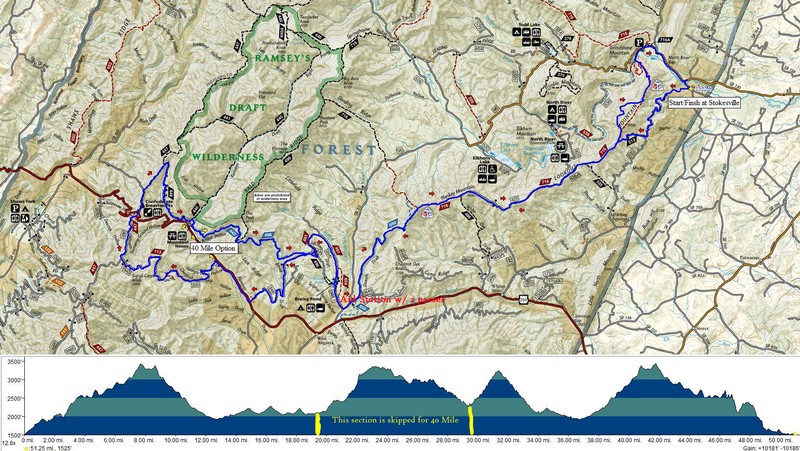 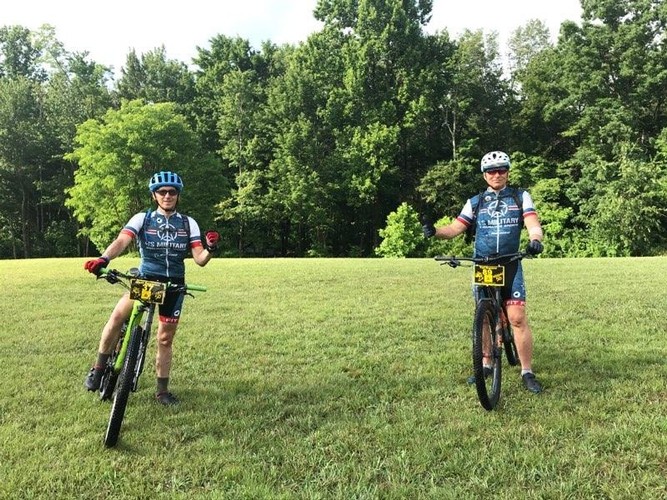 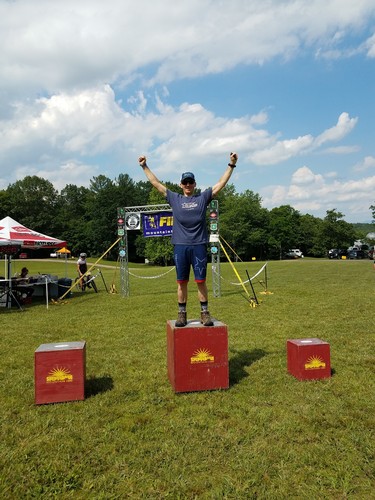 
Background: This race, held at the same venue as the Shenandoah Mountain 100, has been held in late March over the past several years and is a great prep race for the longer ultra-endurance MTB races. Due to COVID-19, the date shifted to late June. Since, many other races shifted to later in the season, it still served its purpose of performing a stark reality check on ultraendurance racers! There are race options of 50, 40, 30, and 10 mile courses.


Conditions: It rained on and off Friday and Saturday so the trails were quite soft. Conditions at start were cool and foggy, high 60s(F), but quickly got quite warm and steamy through the late morning and early afternoon, high 80s.


Strategy: Though the traditional “Stoopid 50” mile course is by far the most popular course option, the “Smart 40” mile option fit best in my training plan, as I was prescribed a 6 hr trail ride this weekend. My plan was to get up and over the Schaeffer Hollow and Hankey Mountain climb and down Dowell’s Draft in 1h45’, back around Bridge Hollow and Braley’s Pond to the foot of Dowell’s by 3h30’, and then back up Dowells, down Lookout, and to the Finish by 5h45'. Therefore, I carried 2L (70 oz) of water and Tailwind Nutrition in the CamelBak with just the powder in an empty bottle in the cage at the start. I could quickly fill that bottle at the aid station at the bottom of Dowells’ and get all the way back around to the same station again with 4 hrs of water/nutrition to get me that 3h30’. Then add one bottle’s worth to CamelBak and one bottle in cage (grand total of ~132 oz to cover me for up to 6 hrs).


Race Execution: Chris Scott and staff had done a masterful job of organizing and running this race with every precaution you would consider for our current environment. We were arranged in a starting grid based on bib # (presumably based on previous year’s finish times) and were sent off in waves of 10 racers at a time, every two minutes. Therefore, you could very well be racing along side someone who started 10 minutes before you or ten minutes after you. This was going to be a six hour MTB Time Trial!

I started in the fourth wave as the only 40 miler in the group (the others were all very strong 50 mile entrants). I hung with them all the way out of the insanely steep climb out of the campground -- I hit my peak HR of the day (179 bpm) while pushing 440W in my lowest gear just 3'24" into the race! We settled down for the remainder of the Schaeffer Hollow climb, though we had to dismount 2-3 times as we caught some folks in front of us in some of the very loose and steep parts – believe me, I was thankful to dismount a couple times on that climb. Once we got up to the intersection with Hankey Mtn Rd for the top half of the Hankey climb we got pretty well spread out, as we passed a few more racers while getting caught by some charging up behind us. So, less than 35’ in, all sense of where you were in the field was lost – it’s all a time trial from this point – you just go as fast as you can.

Once we passed the Crying Tree and approached the Dowell’s Draft descent we were really spread out. I got around those two nasty left-turn switch backs on the way down without incident and settled in for some hands-off-the-brakes descending. About 1.5 miles down the 3.75 mile descent I came across one of the repaired trail “blow-outs.” My front tire carved through it great, but my rear tire slid out while I was leaning into a right bend in the trail -- I probably had my weight a little too far forward, concentrating on digging the front tire into the narrow trail and didn’t have enough weight back on my saddle to ensure rear traction. The rear end of the bike went off the edge of the trail (and side of the mountain!) and I skidded a bit, unclipping my right shoe. Once I got settled back in (having never stopped), I realized my right shoe was super loose. After a couple quick glances down I noticed the upper Boa clamp (and cable lace) were gone from my right shoe – during that slide I must have scraped against one of the rocks on the inside of the trail and sheared the Boa right off! I was certain my day was done. No matter how much I reached down and tightened the lower, my foot wanted to come out of the shoe with every pedal stroke.

Once I made it down to the aid station at the foot of Dowell’s I tried to wrap the shoe with some adhesive tape I had in my CamelBak. It was a “No-Go” on the muddy and wet shoe. I asked the workers, "Anyone have any duct tape?" One lady ran to her car and before I had my bottle filled she presented me with a full roll of Gorilla tape! I quickly wrapped the shoe twice around. She had saved my day! I was in and out of the aid station in just 2’39”.

I chased down three other racers that were pace-lining on the road section and caught them just past the store. Anyone that’s ridden it, knows this four mile stretch is a 2% false flat that can be a little demoralizing because you can’t find the speed you think you should have and it seems like a longer stretch every time I ride it. I discovered during the 2016 SM100 that hooking up with at least two other riders (even if you have to slow down to let them catch you) is the fast and efficient way. Anyway, those three guys peeled off for the Georgia Camp trail, as they were on the 50 mile course, and I cruised into the picnic area to face the crossing of Ramsey’s Draft.

The water crossing was about as deep and fast moving as I've ever seen it in the summer (crossing in the winter is insane – I’ve done it and nearly lost a shoe in the process). As I mentioned earlier, Chris’s event staff were awesome and had strung a guide rope across the creek. So, I grabbed the Scalpel under my right arm and grabbed the guide rope with my left hand and followed the guidance of the two guys helping folks across. The water was moving fast and was cold, but I was simply concentrating on keeping my right shoe on, as it had started to become looser and looser with every unclipping.

I made it across the above-the-knee crossing and was now faced with the rock staircase that opens the Bridge Hollow climb. Of course, the rocks were super wet and slippery, but I got up through there without a problem – again, knowing these trails (and features) makes them much more manageable – you really should ride these trails several times if you intend to race the SM100 in September. The Bridge Hollow climb went well – as well as could be for the very wet conditions. I got through the rock gardens as fast or faster than I ever have before and hiked only a handful of times.

The Braley’s Pond descent was perfect. That trail drains so well, that it was no problem whatsoever. I made really good time coming down, across the trail by the pond, and back over to the aid station at the foot of Dowell’s at the 3h12’ mark (now 18’ ahead of planned pace). My trail angel passed me the Gorilla tape again, two more wraps, poured one packet of Tailwind into the CamelBak, poured in one bottle’s worth, shook up, poured another packet into the bottle, filled the bottle, and I was off again – 3’08” in the aid station.

OK, so up we go! The Dowell’s Draft climb is 3.75 miles, but very smooth and not technical until the very top. You just have to find your gear and settle in. Once I made it to the intersection with Magic Moss I knew I was home free and just had to hike around those two nasty switch backs before I was back on the ridge line. Easy peasy. Descending the top half of Hankey Mtn is a treat that we really only get during this race (or on the occasional training ride). Again, being familiar with what’s up there, where it’s loose, where the standing water is, etc., yields the confidence to just “let it rip.” I got going over 25 mph several times during that descent!

Having pre-ridden the Lookout Mtn ridge line and descent last weekend proved to be super helpful as I knew exactly where I was, what was ahead, and only needed to pay close attention to the slightly different conditions (it happened to rain during our descent of Lookout last Saturday so things were about the same). As you can imagine, that descent is not at all Scalpel-friendly as I feel like I am trying to control a high-speed plane crash, but I got down just fine without hurting myself or the bike. Awesome. As I approached the swinging bridge, there was a young guy with his bike laying across the railings and he was now walking back toward me. “We cross this bridge?” Me: “We sure do. Pull your bike down and scooter it on the rear wheel.” Him: “Ohhhhhh!” Clearly, he was one of the shorter course guys and a first-timer on Lookout. I think he was appreciative that I stayed behind him and guided him across the bridge – now he knows how to do it next time.

So, I then XC’d my way through that rooty trail to get back out to the road and cruised at 19-20 mph on the road back to the campground, up the campground trail, and through the finish line about 20’ ahead of my planned pace. Not bad.


Results: The official results haven’t been released yet, so I don’t know exactly how many folks were in our field of 50+ Masters on the 40 mile course, but the gal at the scoring tent said I won, they took a podium pic, and that works for me.


NONE OF THIS HAPPENS without the incredible support and assistance I get from my smoking hot trophy wife, Tammy White Eggleton. None of it is any fun if I don’t get to do it with great friends and fellow racers like Michael Mullins, Ted Kozlow, and several others that I hadn’t seen since last fall.