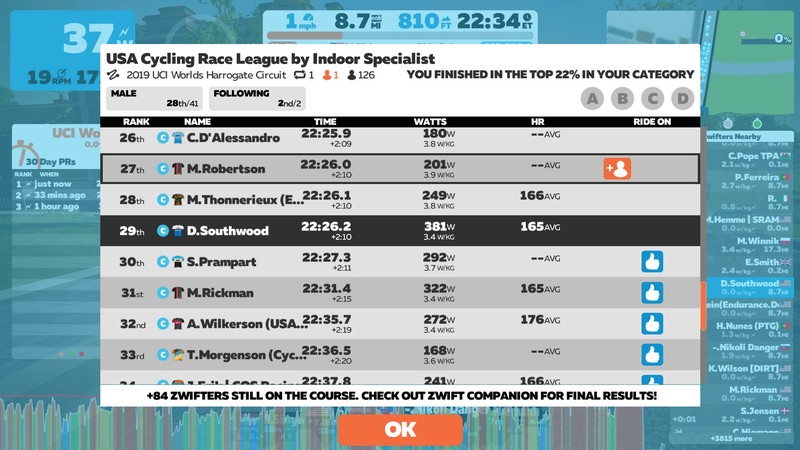 May 04, 2020 - The race that was designed for the lightweights, non-stop up and down. I've said it before and I'll say it again, it pays to know your route ahead of time. I was able to ride two laps just before it started so I knew what I was in for when the timer hit 0. Finished 29th in the race but the rankings gave me 3rd.

Truthfully I should have been crushed in this race.  The climbs were not vicious they just never stopped.  I was in the corral warming up and chatting with the group, I knew right out the gate we would be climbing so I had to be at full throttle when we took off.  I stuck with the lead group when the fence lifted and as they always do in races/rides the groups broke up on the first hill.  I had an idea of how I was going to handle the hills and stuck to it, but as they always say, we all have a plan until we're punched in the face.  I was able to PR my time up the bigger hill and still felt I had enough power to get to the finish, the route was about 8.5 miles so I looked at it as a TT and just kept grinding.   I'm the heaviest guy in the group so in reality I should have been dominated by this group, I think knowledge of the route and the fact that I can push 400w for a solid period of time was my saving grace; I ended with 381w avg and 3.4 w/kg.  It's not the same as my TT series but at least I get to push some watts and feel the thrill of competition.