October 27, 2019 - This is my first year MTB racing. In fact, I've only been riding mountain bikes for a little over a year. I am a roadie who became a triathlete who got tired of riding in a straight line and alone. MTB is all about adventure and the unknown, which is how I like it, because it creates opportunity to learn from others! 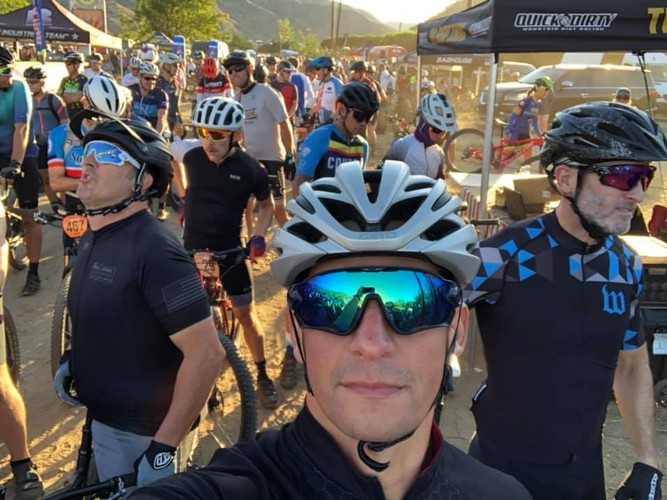 This is my first year MTB racing.  In fact, I've only been riding mountain bikes for a little over a year.  I am a roadie who became a triathlete who got tired of riding in a straight line and alone.  MTB is all about adventure and the unknown.


The first part of 2019, I entered a weekly race series, Quick N Dirty, and had strong results for a beginner. Here in SoCal, the courses are not too technical, but they are fast and rocky. I installed a Stages left-side power meter on my Epic Hardtail and it really helped me gauge my effort, training, and results.  Was I really faster this week or was the competition or course slower?  having a power meter keeps everyone honest.  With this early success, I was hoping I could continue building my skills and fitness for an end of the season "A Race" at the Quick N Dirty Filthy 50.


The final 8-weeks of training leading up the race went really well.  Power was UP and so was my excitement.  I didn't feel fatigued from a full 8-months of training and racing. However, earlier this year during some technique rides, I suffered some mental fatigue.  There is always a learning curve in everything, and MTB is no different.  When you first ride, you don't know what you don't know and you just "go for it;" but, then you have a couple of crashes or 'skill checks' and you become more aware and nervous about riding, which takes you backwards.  This was my summer, and I got a lot slower despite having more power. I intentionally took a full weekend before this race to session at a local bike park.  It wasn't pretty or exciting, but I finally started to get my groove back.


When the race started, I was ready and relaxed.  I had good placement from the start and made early moves to get with a group that matched my pace.  At the first major descent, I held my own and was not passed by anyone, which was a rare treat!  I knew the course very well from racing on it previously, and I was feeling strong.  AND THEN BAM! WIPEOUT!


Going into a very mild and firm turn at mile 10, something went wrong and caught the outside of my fork or wheel.  It literally stopped, while, myself and the bike catapulted around it. I jumped up as fast I as could to get going again, but apparently it wasn't fast enough and I lost a lot of ground.  Worse yet, the crash impacted my psyche for almost the remainder of the race. I continued to make up ground on all the flats and ascents, but I went back to loosing ground on the descents.  It also didn't help that it was crazy hot that day.


Race week brough with it the Santa Ana winds, which dried everything out more than normal, including the air.  Temps were in the 90s with very little humidity.  My body typically responds well to the heat, but on race day very few people were operating at optimum. I was flying through my hydration and nutrition.  I budgeted appropriately for a 4hr race, but with the conditions, I ended needing to fuel as if it was a 6hr race.  I had to make two aid stations stops, but so, too, did everyone else. I'm sure some time was lost here, but I don't beleive it was that impactful.  Plus, it would've been a whole lot worse to skip the aid stations for the sake of time and then BONK before the race ended.


The last 10 miles I was emotionally done and getting close to it physically, but my legs felt fantastic. There were a lot of flat straight sections and my inner roadie kicked it.  I began picking off competitors and asking them to paceline with me to the end.  Fortunately, then did and we were all flying to a great finish.  But, it wasn't fast enough and I finish 38th on the day.  I was hoping for a 4hr race and I completed 52miles with 4k' elevation gain in 4hr 7m.  Darn it.


But, that's bike racing.  You don't always win.  In fact, most people will never win, and even the best have more disappointments than victories. Racing, like life, is all about the experience and how you respond.  I learned that I need to keep practicing my skills and not just my power and stamina. I made a lot of friends on race day, and not just out on the course. Our sport depends on relationships, not just an event.  Talking with vendors, organizers and other racers helped me learn new things about training, equipment and opportunities, and also allowed me to be an encouragement to them.


This was my last race for 2019.  It didn't end the way I wanted, but I'm left with even more excitement and knowledge for an even better 2020 on the dirt! Maybe I'll ask Santa for a new Stages DASH so I can get premium navtigation and a bright color screen so I can see my route and times regardless of external lighting. Knowledge is power, afterall.