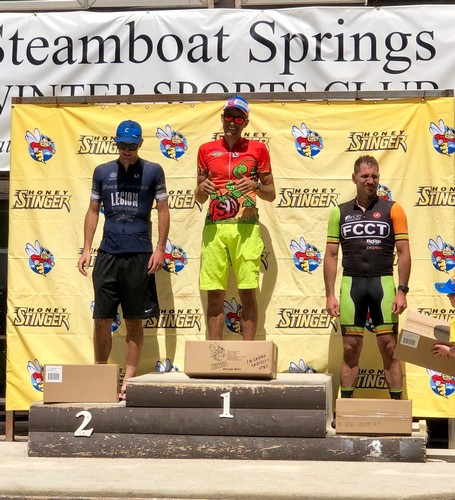 2nd (or 3rd?) solo citizen male 5:09 and change.  Results were very screwy as race doesnt use timing chips.  Was riding with eventual winner for first 4 hours (1st hour we were stuck behind the relay teams who started 10 minutes ahead of us), got stung by a bee on teh first descent around mile 6, didnt effect me but recieved some faulty bottles from 2 rest areas between hours 1 and 2 (one had a bottle top that wouldnt open, the other bottle had a hole and leaked everywhere).  cramped terribly just after 4 hours (likely due to lack of nutrition) and had to stop for 10 minutes to recover, only to find out eventual winner was minutes away from giving up and dropping back on the final climb.  Stopped at the infamous beer and brauts rest stop (mile 42) to guzzle some pickle juice, PBR, salty brauts and anything else available.  Got passed by 1 or 2 others in my division.  Final 8 miles were all downhill and guy in 2nd (or 3rd?) was a cautious descender so I caught him with .5 mile to go when he washed out on a dusty corner.  Goal was sub 5 hours, and would have been in 4:55 range without cramps, likely in a sprint against eventual winner.  Got announced as second place for the podium and prizes, but results were apparently corrected and had me third, still not sure what the final results are but o well.

Race was awesome, made some friends, rode some incredible trails and it was very well supported (minus the timing issues).  Racing between 7000 and 8300 feet wen you live at 600 feet is no joke and certainly contributed to the severe cramps.  Elevation did not inpact my breathing as bad as expected.  Looking forward to returning after living and training in higher elevation to acclimate. 10/10 recommend tis race and visiting Steamboat Springs.