210 miles across the mitten on a single speed 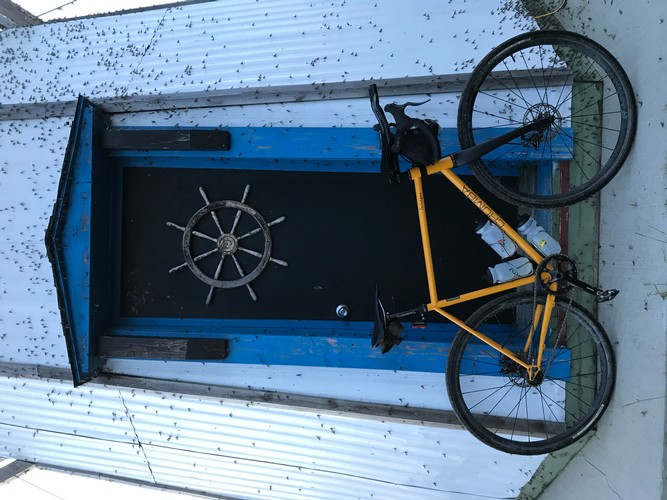 The day shortly after dawn on the chilly coast of Lake Huron. The mass start rolled out enthusatically, we all knew, for the most part, the day we would have in front of us.

Three miles in we hit the dreaded "wet road". This brought anyone in the botton 85% of the field to almost a stand still. Guess what, i was in that part of the group and despite my marginal CX skills, the crowd forced me to dismount and run through mud. Great, wet shoes at the very begining. Once past the bottleneck the pace organized and we managed a 20 mph tempo all the way to checkpoint one (53 miles). Pulling up to the team car seemed almost unnecesary. I was still feeling fresh, the course was flat and fast. Despite the feeling like I could go on without the stop, I did change my socks.

Heading out into section two we kept the tempo high but not quite as fast. We kojed about how easy the day seemed to be unfolding. How foolish we were in our overconfidence. The terrain started to get a little sandy with a couple of short kickers, but no big deal. By the time we got to checkpoint two (103 miles) we were feeling it a bit more and not stopping wasn't even discussed. Emptying the trash from our pockets and filling up bottles, my team mate I and shared a bag of Cape Cod chips and moved on. Still feeling the fatigue from the prior weeks race, I told my fresher teammate to ride on ahead and he gladly did. I woud spend the rest of the ride alone.

The third section was by far the hardest or dare I say most sadistic. The hills appeared and most of them seemed to be made of sand. Who knew Michigan was made of sand? Here again the CX skills paid off and I rode most of the sections with few focred dismounts. Even my seemingly narrow tires (Gravel King SK 38s) were a great choice, but I fear I paid a little in effort to negotiate some sections that fat tires would have rolled over. The section seemed to drag on and it took a long time to roll into checkpoint three (163 miles). I drank a Dr. Pepper and filled all my bottles. The narrow selection of race fuel I brought meant that after 8 hours I was alreay sick of the same things and I resorted to PayDay candy bars. After about fifteen mintues at the stop, I remounted for the most mentally tough part of the day.

The final setion saw me racing the sun even though this was the longest day of the year. Between the full day of riding, fighting terrain, and poor fueling choices I could "smell the barn" at mile 200. The road evened out in this section with some small hills and far less sand. Between watching the sun and the battery level on my Wahoo Bolt both descend I was determined to get to Luddington before the dark enveloped me or my GPS. After getting out of the Manistee National forest and into farm land the going seemed to get easier physically but the mind games were set to 11. The finish was due West but the route kept weaving around and that got discouraging. Finally when I made it into town my pace picked up as I could pick off a few riders in front of me. I pulled into the park and the sun had not yet submitted to the horizon, Wahoo at 6%.

I had made it, crossed the finish line before sunset, in 4th overall for single speed and fully fatigued. I met up with my team mate and got a picture with my wheel in Lake MIchigan. All in all a great day.